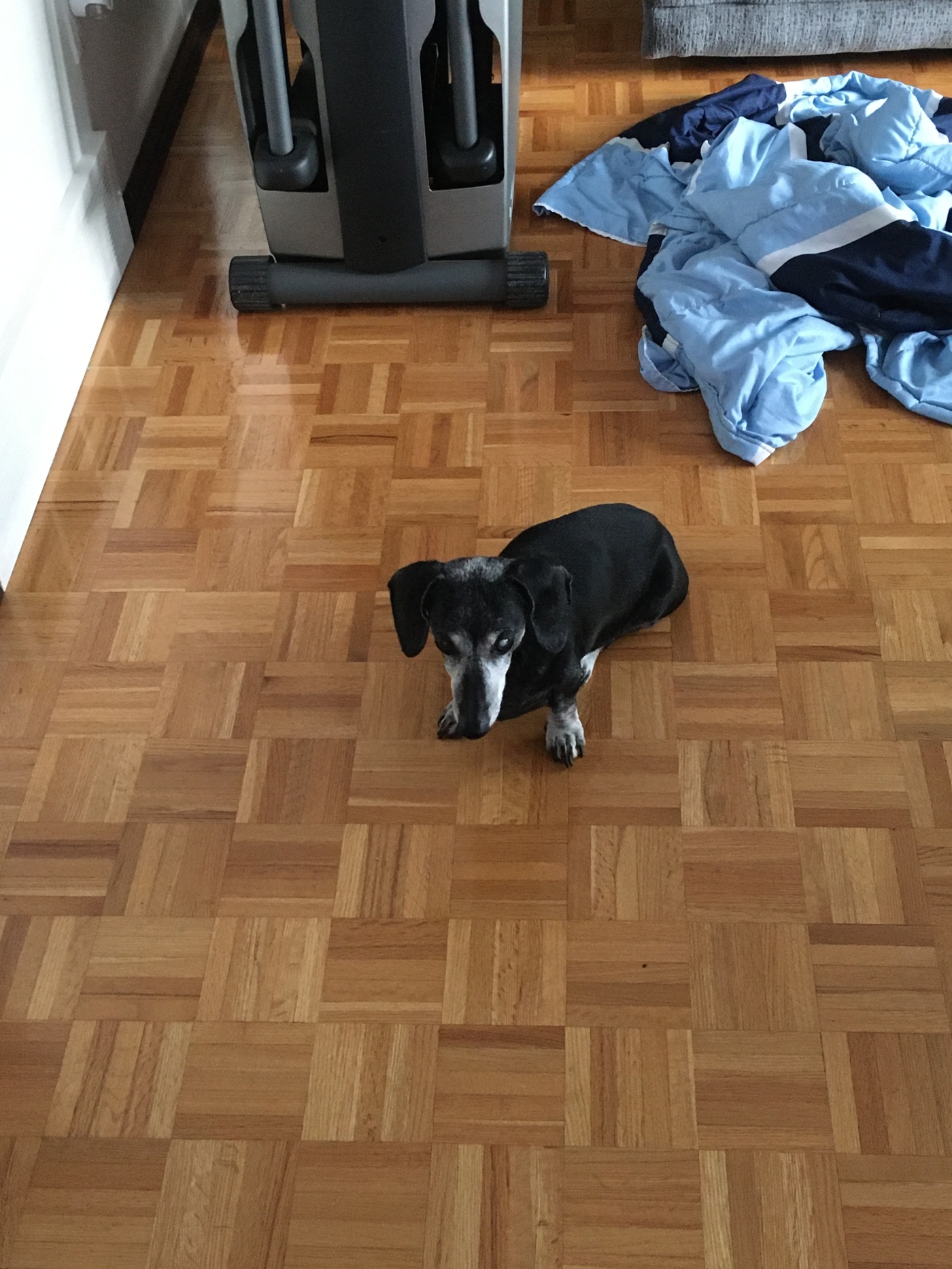 I can’t breathe. It’s happening all over again. I went through this once before a few years back and it has returned. Sleep is none existent and anxiety is at an all time high. I don’t want to accept it but deep down I know it’s for the best. I lost my best friend,again.

This is going to be long and heartfelt. This is my second time and it’s hasn’t gotten easier. I believe in fact it’s worst. I’m talking about losing your dog,your partner,your heart.

Jackson came into our life when we got married. We got him as a new born puppy. Barely 2 months old and shaped like an alien.He was the runt of the litter and we loved him the second we laid our eyes on him. He was a pure bred miniature dachshund,black and tan.

I remember the day we brought him home. It was a chilly night and he was so tiny that we had him in my wife’s jacket. Since that day,it was official. He was clinger. That boy would not leave our site. Wherever we were,he would stick to us. We never complained,except when we would trip over him.

Year after year he made us happy. Quirky,check. Funny,check. I remember when we were trying to teach him to pee on newspaper and pee pads with treats. He would pee so slightly to get a treat and repeat. He did this for days. He was so cute we let it be.

Of course we got him toys and a bed. All of these would have a mere week before seeing the garbage. His teeth were made of steel to his last day. He tore up everything. I remember once he ripped a hole in his bed just to go and sleep inside of it. Last year he chewed through a plastic child gate. Just to get out of a room. Now that’s dedication.

We found the only toys that managed to get some lengthy existence were the Kong toys.

As he got older so did his muscular body. That dog had the hind legs of a horse. So powerful with a massive chest. He would jump all over the place. Of course,this proved to be a long term damaging effect as he got older. Luckily after switching veterinarians we got him on some natural injections that gave him life again.

One thing about Jackson that was odd but never affected us was his constant hatred for people. He just never liked anyone. At first. We did manage to have people over and he accepted them for the night,but that was it. The same people got barked at the next time around. He wasn’t violent. Just made sure to make you uncomfortable.

Jackson definitely had his nervous ticks. One that drove us crazy mainly because it required regular visits to the vet was chewing on his tail. Once he chewed it so much there was blood and we just freaked out. Another one of his crazy ticks was licking his paw. He did this to his last days.

When we bought our house in the country we thought it was perfect. We soon realized it wasn’t. I made a promise to my boys that we would be back in the city soon. I thank God that we were able to get them back in the city surrounded by other dogs and people. They,along with us needed this.

One week ago,we were all in the kitchen when he fell over and had a seizure. Lasted a few seconds. And then another one. And another one. He had a total of five in 90 minutes. Straight to the vet. They call it cluster seizures. We ran top of the line blood work and all came back negative. He was in great health. 13 years old and impeccable inside. But the problems wasn’t there. It was a tumor on his brain. We went home with the epipen version of seizure medication. Needless to say the next day we had to go back and pick up the real medication. After some research and discussions with the vet we also got him on some cbd oil.

He had good days and he had terrible days. There was one day when he had absolutely no seizures and was actually playing with his ball. He loved that ball.

But the day after,it was terrible. Seizure after seizure after seizure. The emergency injections wouldn’t even work. Straight to the vet. No wasting time,they grabbed him and started the drip. My baby boy had to stay at the clinic til the evening. He had no episodes. We were so grateful. In case anyone is wondering,I left my t-shirt with him so he was not all alone.

That evening we picked him up and headed home. The traffic was brutal. Instead of a 20 minute drive took us nearly an hour. No episodes. We got home and it started again. I had to administer the emergency injections again.

We threw everything we could at the disease. But it was way too strong and had advanced too much. We managed to have a few hours of uninterrupted sleep with Jackson. He wouldn’t walk. If he went to the bathroom he would just lay on top and of course I automatically moved him. He was gone. Not physically but spiritually and mentally. The look on his face said it all. I am ready. It killed us. I mean it fucking shattered us. The one thing I am grateful for was knowing there was no pain. Saturday morning we called and arranged the one appointment nobody ever wants to do. We were a ball of tears. Anger filled my heart. I cursed at god calling him every word I could think of. In reality,he gave Jackson a lengthy and tremendously blessed life. It was time. By Saturday afternoon,he got reunited with his sister. His brother shooter was with us to understand why he will not see him again. It was difficult.

If you are reading this and wondering why so descriptive,well because there are persons out there going through this right now. Or soon.Its hard. It sucks. Tears and anger then joy and smiles. Every emotion is being felt and the worst part is that we can’t escape it. We have to deal with the situation.

We loved Jackson more than words. We made sure to tell him throughout the years. Play with him. Give him treats. Wrestle. And he always made sure to greet us when we arrived. No matter what we were going through he was there for us.

Jackson gave us life. We gave Jackson life. Now that he is gone,I find myself having difficulty breathing. I’m scared. I want him back. But that would be unfair. The quality of life would be so terrible I would be a monster.

Jackson taught me about enjoying the sun. He loved the sun. Right before we were set to leave,we sat outside on our porch,Jackson in our arms and the sun was just beating down on us. He looked so peaceful and happy that we knew right then and there,God set the day.

I truly hope if anyone reads this and is going through something similar to remember. You are not alone. Yes,it sucks. Yes,It feels like the end of the world. We will heal. Spend as much time as you can with your pets. They need us as much as we need them.

This site uses Akismet to reduce spam. Learn how your comment data is processed.